I feel like audiobooks don’t always get the recognition that they deserve. I will admit I was one of those people who was never really interested until I decided to try one out… and now I’m OBSESSED. I listen to them all day at work, while I’m driving, running errands, etc. They’ve honestly been since a game changer in my reading life. So I decided to highlight some of my recent additions to my audiobook lineup.

P.S. I am so thankful for Audible’s return policy. It truly is amazing.

The Alice Network by Kate Quinn

1947. In the chaotic aftermath of World War II, American college girl Charlie St. Clair is pregnant, unmarried, and on the verge of being thrown out of her very proper family. She’s also nursing a desperate hope that her beloved cousin Rose, who disappeared in Nazi-occupied France during the war, might still be alive. So when Charlie’s parents banish her to Europe to have her “little problem” taken care of, Charlie breaks free and heads to London, determined to find out what happened to the cousin she loves like a sister.

1915. A year into the Great War, Eve Gardiner burns to join the fight against the Germans and unexpectedly gets her chance when she’s recruited to work as a spy. Sent into enemy-occupied France, she’s trained by the mesmerizing Lili, the “Queen of Spies”, who manages a vast network of secret agents right under the enemy’s nose.

Thirty years later, haunted by the betrayal that ultimately tore apart the Alice Network, Eve spends her days drunk and secluded in her crumbling London house. Until a young American barges in uttering a name Eve hasn’t heard in decades, and launches them both on a mission to find the truth…no matter where it leads. 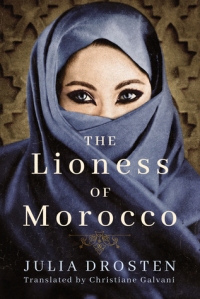 The Lioness of Morocco by Julia Drosten

Independent-minded Sibylla Spencer feels trapped in nineteenth-century London, where her strong will and progressive views have rendered her unmarriageable. Still single at twenty-three, she is treated like a child and feels stifled in her controlling father’s house.

When Benjamin Hopkins, an ambitious employee of her father’s trading company, shows an interest in her, she realizes marriage is her only chance to escape. As Benjamin’s rising career whisks them both away to exotic Morocco, Sibylla is at last a citizen of the world, reveling in her newfound freedom by striking her first business deals, befriending locals…and falling in love for the first time with a charismatic and handsome Frenchman.

But Benjamin’s lust for money and influence draws him into dark dealings, pulling him ever further from Sibylla and their two young sons. When he’s arrested on horrible charges, the fate of Sibylla’s family rests on her shoulders, as she must decide whether she’ll leave him to his fate or help him fight for his life.

Nikki lives in cosmopolitan West London, where she tends bar at the local pub. The daughter of Indian immigrants, she’s spent most of her twenty-odd years distancing herself from the traditional Sikh community of her childhood, preferring a more independent (that is, Western) life. When her father’s death leaves the family financially strapped, Nikki, a law school dropout, impulsively takes a job teaching a “creative writing” course at the community center in the beating heart of London’s close-knit Punjabi community.

Because of a miscommunication, the proper Sikh widows who show up are expecting to learn basic English literacy, not the art of short-story writing. When one of the widows finds a book of sexy stories in English and shares it with the class, Nikki realizes that beneath their white dupattas, her students have a wealth of fantasies and memories. Eager to liberate these modest women, she teaches them how to express their untold stories, unleashing creativity of the most unexpected—and exciting—kind.

As more women are drawn to the class, Nikki warns her students to keep their work secret from the Brotherhood, a group of highly conservative young men who have appointed themselves the community’s “moral police.” But when the widows’ gossip offers shocking insights into the death of a young wife—a modern woman like Nikki—and some of the class erotica is shared among friends, it sparks a scandal that threatens them all.

The Light Between Worlds by Laura E. Weymouth

Five years ago, Evelyn and Philippa Hapwell cowered from air strikes in a London bomb shelter. But that night took a turn when the sisters were transported to another realm called the Woodlands. In a forest kingdom populated by creatures out of myth and legend, they found temporary refuge.

When they finally returned to London, nothing had changed at all—nothing, except themselves.

Now, Ev spends her days sneaking into the woods outside her boarding school, wishing for the Woodlands. Overcome with longing, she is desperate to return no matter what it takes.

Philippa, on the other hand, is determined to find a place in this world. She shields herself behind a flawless exterior and countless friends, and moves to America to escape the memory of what was.

But when Evelyn goes missing, Philippa must confront the depth of her sister’s despair and the painful truths they’ve been running from. As the weeks unfold, Philippa wonders if Ev truly did find a way home, or if the weight of their worlds pulled her under.

The history books say I died.

They don’t know the half of it.

Anastasia “Nastya” Romanov was given a single mission: to smuggle an ancient spell into her suitcase on her way to exile in Siberia. It might be her family’s only salvation. But the leader of the Bolshevik army is after them . . . and he’s hunted Romanov before.

Nastya’s only chances of survival are to either release the spell, and deal with the consequences, or enlist help from Zash, the handsome soldier who doesn’t act like the average Bolshevik. Nastya’s never dabbled in magic before, but it doesn’t frighten her as much as her growing attraction for Zash. She likes him. She thinks he might even like her . . .

The Candle and the Flame by Nafiza Azad

Fatima lives in the city of Noor, a thriving stop along the Silk Road. There the music of myriad languages fills the air, and people of all faiths weave their lives together. However, the city bears scars of its recent past, when the chaotic tribe of Shayateen djinn slaughtered its entire population — except for Fatima and two other humans. Now ruled by a new maharajah, Noor is protected from the Shayateen by the Ifrit, djinn of order and reason, and by their commander, Zulfikar.

But when one of the most potent of the Ifrit dies, Fatima is changed in ways she cannot fathom, ways that scare even those who love her. Oud in hand, Fatima is drawn into the intrigues of the maharajah and his sister, the affairs of Zulfikar and the djinn, and the dangers of a magical battlefield.

Nafiza Azad weaves an immersive tale of magic and the importance of names; fiercely independent women; and, perhaps most importantly, the work for harmony within a city of a thousand cultures and cadences.

Isabelle should be blissfully happy – she’s about to win the handsome prince. Except Isabelle isn’t the beautiful girl who lost the glass slipper and captured the prince’s heart. She’s the ugly stepsister who’s cut off her toes to fit into Cinderella’s shoe … which is now filling with blood.

Isabelle has tried to fit in. To live up to her mother’s expectations. To be like her stepsister. To be sweet. To be pretty. One by one, she has cut away pieces of herself in order to survive a world that doesn’t appreciate a girl like her. And that has made her mean, jealous, and hollow.

Until she gets a chance to alter her destiny and prove what ugly stepsisters have always known: it takes more than heartache to break a girl. 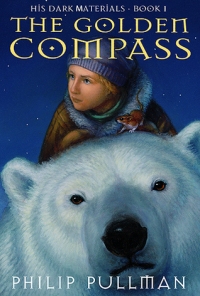 The Golden Compass (His Dark Materials, #1) by Philip Pullman

Lyra is rushing to the cold, far North, where witch clans and armored bears rule. North, where the Gobblers take the children they steal–including her friend Roger. North, where her fearsome uncle Asriel is trying to build a bridge to a parallel world.

Can one small girl make a difference in such great and terrible endeavors? This is Lyra: a savage, a schemer, a liar, and as fierce and true a champion as Roger or Asriel could want–but what Lyra doesn’t know is that to help one of them will be to betray the other.

Do you listen to audiobooks? What are some audiobooks that you plan to listen to next? Have you listened to any of the books on my list? Do you like to return books on Audible as well?