A million universes. A million dangers. One destiny.

The fate of the multiverse rests in Marguerite Caine’s hands. Marguerite has been at the center of a cross-dimensional feud since she first traveled to another universe using her parents’ invention, the Firebird. Only now has she learned the true plans of the evil Triad Corporation—and that those plans could spell doom for dozens or hundreds of universes, each facing total annihilation.

Paul Markov has always been at Marguerite’s side, but Triad’s last attack has left him a changed man—angry and shadowed by tragedy. He struggles to overcome the damage done to him, but despite Marguerite’s efforts to help, Paul may never be the same again.

So it’s up to Marguerite alone to stop the destruction of the multiverse. Billions of lives are at stake. The risks have never been higher. And Triad has unleashed its ultimate weapon: another dimension’s Marguerite—wicked, psychologically twisted, and always one step ahead.

In the conclusion to Claudia Gray’s Firebird trilogy, fate and family will be questioned, loves will be won and lost, and the multiverse will be forever changed. It’s a battle of the Marguerites…and only one can win.

As always, Claudia Gray knows how to keep the action going. You never have any trouble with growing bored or tired, as her pacing is always a steady wave. I loved how exciting this book was from start to finish. Basically this entire trilogy is one wild ride that you never want to get off of. I’ll probably read any book that Gray ever writes now, if this suspenseful action is her M.O.

My wonderful characters are still just as amazing in this finale. Marguerite has developed into such a feisty and strong character. She doesn’t let anything stand between her and saving her family. I loved how a strong family unit is portrayed in this series, as families or even parents, are usually nonexistent. But not here! Marguerite’s parents are so adorable and amazing. I always enjoy when they go off on one of their science tangents, so cute! Paul continues to be such a dreamy book boyfriend. I loved how his character goes through a transformation in this book. I found it interesting how much he changes and has such a realistic reaction to everything he’s gone through. And I finally really enjoyed Theo in this book. I always found him kind of shifty and didn’t really trust him as a character. I almost felt like Gray was trying too hard to create a really cool character, an opposite of Paul. However, I finally grew used to him though and was able to enjoy his personality. 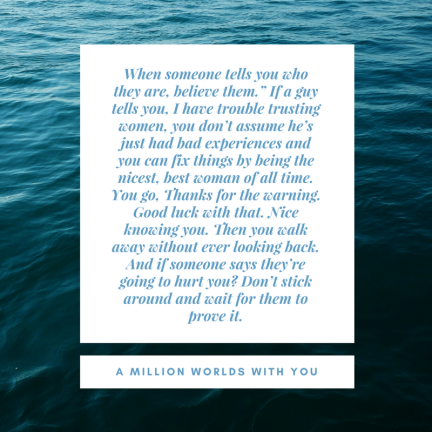 My only issue with this final book was that the ending was a bit too clean and easy. I’m sure y’all know by now how much I prefer my endings imperfect and bittersweet. It just doesn’t feel so real if things turn out perfect. I mean I know it’s fiction, obviously, but I still want them to be a little messy. I actually thought that Gray would give me that kind of ending, but unfortunately (for me), that wasn’t the case. Happy endings galore for those of you who prefer that sort of thing! Everything just felt too quick, too perfect. I almost felt like if you blinked then you could’ve missed that it was over.

Overall, I really enjoyed this series. It was an incredibly fun ride, full of all sorts of twists and turns. I loved never knowing what was going to happen or where Marguerite’s dimension traveling would bring her to next. If you’re looking for a science fiction novel that is fun, full of a swoon-worthy romance, and the cutest family ever… this is it.

Have you read A Million Worlds with You? What did you think of the Firebird trilogy? Did you enjoy the ending? Which Marguerite was your favorite?

5 thoughts on “Book Review: A Million Worlds with You (Firebird, #3)”