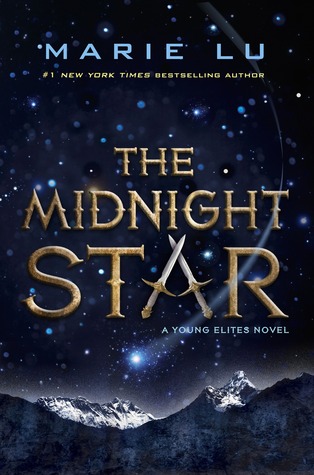 I don’t know if there’s anything worse than having a book that you’ve soooo looked forward to for a while, letting you completely down. And unfortunately, that’s what happened to me with The Midnight Star (The Young Elites, #3) by Marie Lu.

There was once a time when darkness shrouded the world, and the darkness had a queen.

Adelina Amouteru is done suffering. She’s turned her back on those who have betrayed her and achieved the ultimate revenge: victory. Her reign as the White Wolf has been a triumphant one, but with each conquest her cruelty only grows. The darkness within her has begun to spiral out of control, threatening to destroy all that she’s achieved.

Adelina’s forced to revisit old wounds when a new danger appears, putting not only Adelina at risk, but every Elite and the very world they live in. In order to save herself and preserve her empire, Adelina and her Roses must join the Daggers on a perilous quest—though this uneasy alliance may prove to be the real danger. Y’all, I just couldn’t with this book. I had been looking forward to it for soooooo long, and this is how I’m repaid?! So disappointing. And why the hell wasn’t Enzo focused on more?!?!?!?!?!?

Have you The Midnight Star yet? What are your thoughts on it? Am I being too harsh? Inquiring minds want to know!