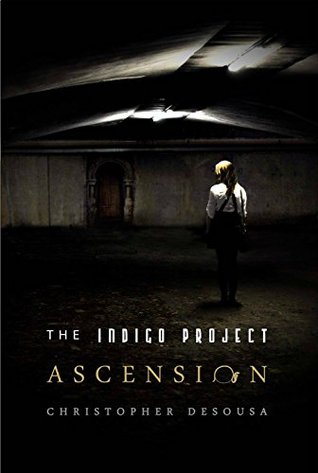 I received a free copy of this book from NetGalley and Random Occurrence Publishing in exchange for an honest review.

I made it almost 50% through Ascension (The Indigo Project) by Christopher De Sousa before I finally had to just put an end to it. I wanted to like it, I really did! The premise and plot were extremely interesting, well thought out, and unique, but I think the execution just wasn’t quite there.

Katherine Munroe is most definitely not your typical teen and just about the only thing typical are her high school boy problems. She does however have quite the amazing ability to draw and much to her own confusion she accidentally lights things on fire. Even more plaguing are her reoccurring hallucinations, always thinking she is losing it, or so she thought. But then, after a horrific attack on her life resulting in the death of her father, she realizes there is something…more. Anzu, a winged beast of a different sort, and subject of Katherine’s hallucinations, saves her and become’s her guardian.

Bereaved over the loss of her father, she quickly discovers the unthinkable. Her entire township, as she knew, is a secret government experiment. And her father? Well, he was more of a caretaker since her birth. This rogue operation, better known as Project Indigo, is at war with a corrupted race of celestial beings.

In order to save the world and defeat The Corrupted they need the help of Katherine. Through special training and the discovery of her abilities, Katherine and Project Indigo battle the entities set to destroy them while she discovers the truth about her family, her lineage, and her future.

This is a YA sci-fi/fantasy novel but yet it reads like a literary fiction book?! Seriously. I don’t know what the author was trying to prove by writing in such a formal style but it’s a complete mismatch from the storyline itself. I mean, no teenager thinks or talks without using any contractions and only uses formal words. De Sousa is clearly out of his depth here on attempting to bring a teenage character to life. This is an example of what he apparently thinks that teenagers sound like…

Well I can’t think of any person more suited than me, who can provide some kind of grounded insight into her ailing situation, he thought, but last time I offered her my support, she didn’t want it. It really is a curse to be so intelligent a young man, and possessed of such invaluable intuition beyond my years. But I’ve little choice; I must take it in my stride if I’m to help those in need, even if she isn’t really the sort who can handle what must be said. I can’t afford to stray from my duty, even if I think of her as too immature and naive to make any sense of what’s said.

Now really, people. I don’t care how smart these kids are supposed to be, they’re still kids. De Sousa must have been birthed straight as an adult and skipped out on his childhood because he has no idea what normal people sound like. I seriously wish you could all read just the first chapter to see what I mean. Your mind would be blown, I swear!

Also, the world building was one big info dump. I had no idea what was going on the entire time! The prologue is just a big mess! The first few pages describe some epic battle years ago using all of these different names and terms, yet none of it makes sense. It’s almost as if you’re already supposed to know what it all means and this is just a brief reminder. I feel like there must be some obscure prequel novel that De Sousa wrote and thinks he published but the manuscript is actually still just sitting on his nightstand and no one’s ever even seen it.

What I can say is good about this book is the premise. You can tell it’s very detailed and has some really cool ideas. It was honestly the thing that kept me reading for so long. Like Atlantis? Celestial beings? Area 51? Covert government operation? Teens with special powers? It sounds really cool, right?! I just wanted to see where it was going and if the endgame brought it all together in a very clean way. But I think this is only the first book in a planned series and I cannot stick with it for that long. I’d end up banging my head against the wall in mental frustration if I continue on, especially if there’s multiple books.

Basically, I think the problem with Ascension is this – great premise, BAD execution.

If you or someone you know has read this book and understands what was going on, then please let me know! I also encourage you to read it for yourself and see if you feel differently about it than I do. It’s actually averaging 3 stars on Goodreads so it could just be me.